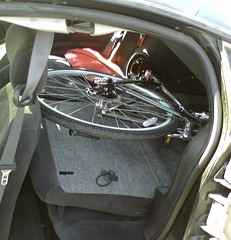 I got a hat bike.

Yeah, I went and bought a bike on Sat. And some accessories. So far, I've been riding at least 20 minutes a day. It is good for me. Or something.

I went through and started doing a final clean-through on my boxes and suitcases and such. 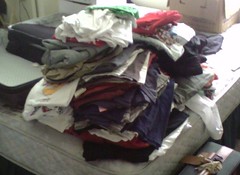 I have a few clothes. Quite a lot of t-shirts. This pile is the pile of stuff to keep. There's another pile I didn't take a pic of that is to be discarded in some fashion - most likely Goodwilled.

I've been restless and unsettled lately. I've had a couple bouts with lethargy and insomnia both, as well as fun stomach blahness issues.

Looking forward to being out of here, and I'm attempting to make some sort of progress each day towards that.

I might be selling the following, if anyone is interested in possibly purchasing and coming to pick this stuff up sometime late August please let me know:
1 Queen sized bed - mattress, frame, box springs, comforter. Holder brand, about 15 years old as I recall.
1 Double sized bed - mattress only, comforter. Don't recall the brand, don't know age.
1 Klipsch 15" THX Certified dual subwoofer
1 Klipsch center channel speaker
1TV - 34" Diagonal Tau Series PureFlat HDTV Monitor with Precision Picture Processing (not sure of exact model right now, will update) with box
1 Computer - home built 2.4 GHz Intel processor, 1Gig RAM Asus mobo, 36GB Raptor boot drive, 400GB RAID array for storage (no extras, no monitor, no mouse, no keyboard, etc)
1 Entertainmnet center - it's big enough to hold the TV with room to spare
1 Couch - extra long, even I can lie down flat on it
1 Dresser/chest of drawers - it's kind of small, but it works fine.
1 Computer desk - metal tube and wood surfaces. Very simple.
1 Grill - propane tank is empty, but comes with it.
1 set of deck furniture - green plastic, 2 chairs, 1 small table.
3 Bookcases - pre-assembled DIY kits, nicer than most cheap ones. 2 taller ones and 1 shorter.
2 media shelves - 1 thin/tall tower and 1 shorter/wider one.
2 office chairs - both with massage chair mats, one is vibrate/heat and the other is shiatsu.
2 carpet protector plastic thingies for office chairs to roll on
2 DDR DX pads
2 BeatMania IIDX ASCs for PS2
1 lot of MageKnight figures - quite a few from a variety of sets, also have 2 laminated Duingeons maps and all 3 tiles sets for MK:D, and a few of the BigFigs
1 lot of MechWarrior figures - quite a few from a variety of sets, also have a laminated starter map and terrain pieces
1 lot of HeroClix figures - quite a few from a variety of sets, also have a Sinestro BigFig, around a dozen laminated maps, and quite a few LE's
1 lot of 2 cats, 2 carriers, and misc supplies

(pictures available upon request, or perhaps in a future post, or an update to this one)

I spent the morning yesterday trying to deal with a vendor. Their phone system was glitchy, and when I finally got to talk to someone they informed me that they had just switched to a new support dekstop sharing utility (from WebEx to some branded Citrix variant) and had not yet installed it. I was to call back in 10. Being somewhat familiar with how such things work, I waited about 25 minutes before calling back, and was informed that the install was still in progress. About an hour later, I finally got the callback and we started working the issue.

Well, we should have. Except that they were picky because my machine has and older version of the software on it. BFD, if it gets fixed there, then it gets fixed on the newer machines. So I had to run between my desk and the lab several times to get transferred over there and reconnected and all that. The result was adding the domain to the hosts file entry to suddenly, magically, make it work. Right. Works on all versions. Yep.

On a side note, their hold music is VERY obnoxious. Imagine a music box playing. Now imagine a nearly-grammaphone quality recording of that music box. Now imagine that streamingly assaulting your ears over the phone while you're on hold for 20 minutes. Multiply that by 3 times in the same morning. Homicidal yet? I nearly was.

I was just browsing the list of current movies playing, and saw The Break-Up. Interesting.

So let's say you were dating someone, and things weren't going so well. Let us also assume that you, at times, revert to some behaviours that other people are both shocked and awed by. In a full excerise of this bahvioral pattern, you invite this person out to see a movie. Yes, you vontuntarily choose this movie, The Break-Up. In fact, you go so far as to order the ticket ahead of time and provide the other person with a confirmation number to pick it up at the theater, just to make sure you get in the show. And you mention you might run a bit late, so it would be better if they got there and picked the ticket up.

If you were paying attention, you have the ( Collapse ) 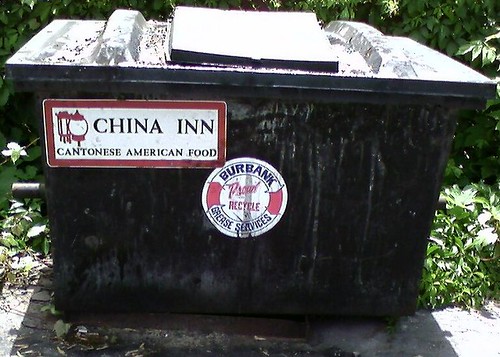 When the name of the Chinese place you picked for lunch is on a dumpster outside... Consider it a warning and go elsewhere.
Collapse